The Markit/CIPS UK Construction PMI report is showing that Construction output growth reached a seven-month high in June – our clients are definitely representing this with all of our teams flat out to ensure that you have the very best workers on your sites.

The key findings from the report are:

The report summary tells us that: 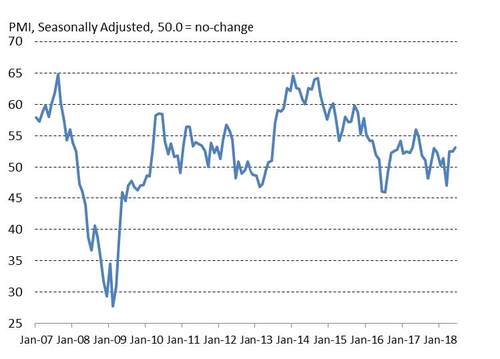 June data revealed a solid expansion of overall construction activity, underpinned by greater residential work and a faster upturn in commercial building. There were also positive signs regarding the near-term outlook for growth, as signalled by the strongest rise in new orders since May 2017 and the largest upturn in input buying for two-and-a-half years. Improved demand for construction materials resulted in longer lead times from suppliers and the most marked increase in input prices since September 2017.

How has this affected your business? Have you seen an increase in tender enquiries?

The seasonally adjusted IHS Markit/CIPS UK Construction Purchasing Managers’ Index® (PMI®) posted 53.1 in June, up from 52.5 in May and above the 50.0 no-change value for the third month running. The latest reading pointed to the sharpest overall rise in construction output since November 2017.

Residential work remained the best performing area of activity. Commercial building also contributed to the stronger overall rise in construction output, with this category of work expanding at the fastest pace since February. At the other end of the scale, civil engineering activity rose only slightly in June, with the rate of growth easing to a three-month low.

Survey respondents noted that a general improvement in client demand had helped to boost construction workloads in June. Reflecting this, latest data indicated a solid rebound in new order volumes following the decline seen during the previous month. The rate of new business growth was the strongest for just over one year in June.

Higher levels of new work contributed to faster increases in employment numbers and purchasing activity during June. The pace of job creation accelerated to its strongest for one year, while the latest rise in input buying was the steepest since December 2015. Construction companies noted that greater purchasing activity reflected new projects starts and, in some cases, forward purchasing of inputs to mitigate forthcoming price rises from suppliers.

Average cost burdens increased at a sharp and accelerated pace in June. The latest increase in input prices was the steepest for nine months, which construction companies attributed to greater transportation costs and higher prices for metals (especially steel). Meanwhile, vendor lead times lengthened again in June, driven by low stocks and capacity constraints among suppliers.

UK construction companies indicated a rebound in business optimism from May’s seven-month low, although the degree of positive sentiment remained much weaker than the long-run survey average. Survey respondents cited infrastructure work as a key source of growth in the coming 12 months.