Key findings from this months IHS Markit / CIPS UK Construction PMI  are showing that all three sub-sectors recorded a loss of momentum since August.

UK construction companies indicated a sustained increase in business activity during September, but the rate of expansion slowed for the second month running. At 52.1 in September, down from 52.9 in August, the seasonally adjusted IHS Markit/CIPS UK Construction Purchasing Managers’ Index® (PMI® ) signalled the weakest upturn in output for six months. 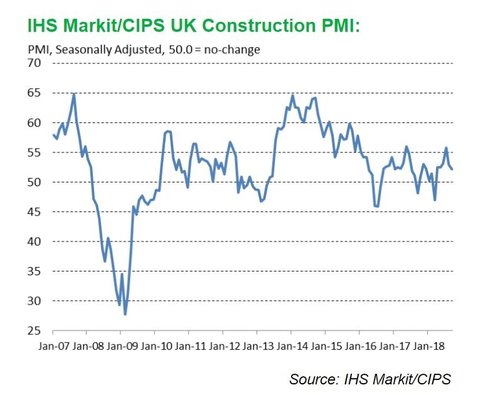 Civil engineering was the worst performing subcategory of construction work, with activity declining at a slightly quicker rate in September. House building and commercial construction continued to increase at a solid pace, although the latest survey indicated weaker growth than in August. A number of firms suggested that subdued economic conditions so far in 2018 remained a factor holding back business activity growth. In contrast to the trend seen for construction output, latest data pointed to a faster rise in new business volumes. The rate of new order growth picked up to its strongest since December 2016, which firms attributed to resilient demand and an upturn in new invitations to tender. A robust rise in staffing numbers was reported in September, helped by another improvement in new order books.

The latest increase in employment was the fastest since December 2015. Sub-contractor usage also increased at the fastest pace for over two-and-a-half years. Survey respondents noted that their own payrolls had been boosted by a larger than usual intake of trainees and apprentices in September. There were also some reports that tight labour market conditions had led to a strategic focus on long-term hiring policies. Delivery times for construction products and materials continued to lengthen in September. Intense supply chain pressures were attributed to stock shortages at vendors and stretched transportation capacity. That said, the latest downturn in vendor performance was slightly less marked than the three-and-a-half year low seen during August.

“There were mixed signals in terms of the near-term outlook. New order books strengthened to the greatest extent since December 2016, which indicates that construction workloads remain on an upward trajectory. Rising demand and tight labour market conditions led to robust job creation, with survey respondents commenting on a larger-than usual uptake of apprentices in September.

“However, latest data showed that overall confidence about the year-ahead business outlook was among the lowest seen since the start of 2013. Construction companies continued to note that political uncertainty acted a key drag on decisionmaking, with Brexit worries encouraging a wait-andsee approach to spending among clients. The main areas reported as likely to see a boost in the coming year were construction work related to large-scale energy and transport projects.” 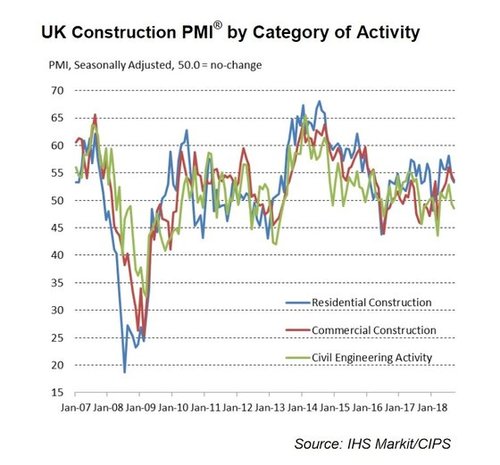 Duncan Brock, Group Director at the Chartered Institute of Procurement & Supply, said: “Despite the biggest rise in new orders since December 2016, the sector remained in a downbeat mood with business optimism at its second lowest level since the beginning of 2013.

“A cause of this malaise pointed to increased cost burdens with both fuel prices on the rise, and acute shortages in raw materials, as supplier delivery times have lengthened to an extent not seen since 2015. The Brexit blot on the landscape was still in evidence as housing activity slowed to a pre-April growth rate and clients hesitated to place orders. Civil engineering was hit the hardest however and under 50 for the second month in a row, which points towards another contraction.

“Workforce planning was not held back however, as the sector kept an eye on the future and increased operating capacity with the biggest rise in job creation since December 2015. Though the struggle for talent remained and many of the opportunities were for entry-level apprentices.

“This tale of feast and famine offers little in the way of reassurance and is more about holding on to stable growth than a sprint to the finish. The weakest overall activity in six months shows that caution and Brexit concern remain roadblocks to strong growth.”